i lost my funny

Ok… when I was writing here, I was considered to be, in the eyes of many… Lucky. I had fame… I had power… I had the love and affection of all… Signing autographs everywhere I go…

Why did I give it up? I tried to convince the public, myself included, that it's mainly due to my humbleness gene, that I didn't like all this attention, that given the choice, I'd choose a family, a small house, a mini-van, a cat named Ester, and nothing more.

Who was I kidding? The real reason I quit was...

I lost my funny!

It's a loss no one can recover from, losing your funny. For the love of life, I tried and I reached deep down into my heart and soul, but nada! No funny! How come? I had it before… I was funny!!! I'd be in my car and would be hailed "HEY!!! YOU'RE FUNNY!" How would something like this slip away from me unnoticed? What? Did I spend all my funny away? Did it slip away in my sleep? Was I cursed? Voodoo stuff? I WANT TO BE FUNNY AGAIN!

Where can I cash that? Ordinary? I don't recall someone being offered a cup of coffee on the house, because he's just… ordinary!!!

Why would anyone be even partially interested in what an ordinary guy says or thinks or feels?

There are 5 types of funny… And alas… I'm not one of them.

You've got your Sarcastic. Black humor always works. It's sharp, and edgy. Sarcastic people are brave too, they aren't afraid that others might miss out on the joke, but they say it anyways. I wish I was sarcastic.

You've got your Smart and Witty. Well I guess no explanation is needed… Smart… aaaaannnndddd… Witty... And I know that I've got no chance! No chance of being that.

You've got your "You-know-what-holes / Jerks". Hey! Blasting at someone or something, awful and wicked as it may sound, does have a ring of humor to it. I don't have the heart for it, unfortunately.


Then there are Prop funnies. Yeah that sounds interesting but I have to be realistic, I can't walk around with a painted horse, a sheep in a clown suit, and juggle 5 balls at the same time. I don't know how to juggle.

Last but not least, there are the Unintentionally Funny funnies. You know the type. The type that think they can run 7 ministries at once.

So… It all boils down to nothing. I'm lost. And I don't mean the hit TV show on ABC (Yeah I admit, I'm totally gaga over it), I'm lost in oblivion.

Unlike Moqtada Al-Sadr, I'm not handsome. So I can't milk that cow. 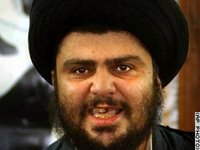 I'm not politically active either. I'm not married, so I have no reason to find excuses to stay out of the house. (I know I'm going to get heat over that, but let's face it, if I was funny enough, it would've been taken light heartedly).

Being funny was my only way of surviving this… this… arena.

And I'm not funny anymore…

its obvious you know your funny , you just fish for compliments, yal 3ayyar keep writing ;-p

They say that people often use humor as a way to bounce back off of their own personal troubles. If that is so, shouldn't you be relieved that you're not funny anymore?

YAY you're back!!!
I still think you're funny.

everytime i try to get out... they pull me back in... (of course you have to picture george castanza saying that but with me saying it instead...)

by the way... i'm going to change my screen name to "Mowgli".

people are starting to think i resemble that guy from the three stooges.

Just Die, you are a Jerk
and silly..

By the way you never was funny. and never will

Mowgli??!
But you can't be cute AND funny!

i'm back on strike again :P

i hate all you kila ma6goog fans...

i'm going to start an anti-kilama6goog blog. I'll only post when he posts, and i'll ridicule whatever he's talking about.

is that true people?

is what kilama6goog saying correct?

Answer to your question :
yes you are not funny.

Mowgli's nice. He sort of smells, I guess, considering the fact that he lives in the jungle and all, but ... yeah, he's nice. Beware of Baloo, though. Heard a lot of bad things about him. Dangerous stuff.

Might send you my army of midgets to take care of you and protect you from Baloo.

And you haven't lost your funny. It's your overactive imagination.

No, it's not true, Mowgli

I'd still read your posts and comment whether you visited or not :)

That goes to you too, Ma6goog

you too think that i ain't funny?

is it a disease? lol i should have checked the Medical Dictionary. :P

Well in all honesty, you meant that comment for me, and me alone.

Dude~, i aint got any idea wat u talking about u Loosing ur Funny! Now that post was 7ada funny.. maybe my sence of humour mo mithiL iL naas bs i was laughing throughout reading the post! hehe!