the picture speaks for itself! (Subject: Babies) 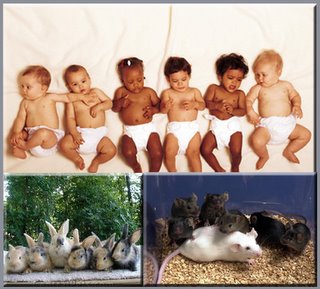 Rabbits: There are usually two to four litters per year with about three to eight young per litter. (Translation: From 6-32 baby bunnies a year).

Mice: Size of litter: 4-14 (even more), average 12 babies. (If you're finding this too gross for you to continue reading… PLEASE THINK OF MICKEY MOUSE and read on).

Not-So-Smart Homo Sapiens: ??? (I didn't want to put a number and insult anyone)


In one of his books, Carlos Castaneda (http://www.amazon.com/exec/obidos/search-handle-url/103-8921787-0964602?url=index%3Dblended&field-keywords=carlos+castaneda) was talking with his mentor Don Juan when Don Juan asked him about his father. Carlos's response was that he didn't like who his father was, not because he was a bad person or something like that, but because his father didn't amount for anything… He ate, made enough to sustain a living, slept, etc. etc.

Don Juan's disagreed with Carlos. He said that since Carlos amounted to something, his father's purpose was fulfilled. So was his mother's. And his parents' parents. As far as he can go back, all his lineage had somehow, even if it was too small to calculate or measure, contributed to make him who he was…

A long time ago, as I was growing up, I had one goal I wanted to accomplish. I wanted to change the world. (Humor me and skip the therapy session, I'd like you to be focused on what I'm trying to say). As years left its mark on me, and I aged, and I'd like to use the phrase "and naturally, with age I matured", but we all know that that is not the norm in this country, I didn't change my goal but changed my perspective towards it. I reached the conclusion that all I have to do to change the world into a better place (and I say it as if it was an easy thing, but believe me its not), is to ensure my children get raised up proper. If I can successfully plant the seeds of kindness, imagination, patience, etc. in my children, in my successors, and someone know that they will in turn pass it on to their children, I think its safe to say, I changed the world to a better place. (I mentioned kindness, imagination, patience, because I believe they are the most important attributes and characteristics someone can hope to have).

It amazes me no end how many people just jump into parenthood without even contemplating how big a task it is. If I gave you 10 Million Dollars, and told you to invest it, I'm pretty sure most people would spend more time studying possible options and investment scenarios than they would for having children. Granted, having children is the easiest and arguably the most fun thing to do in life, (and for women readers, the second most enjoyable thing, chocolate being #1, numere uno), but so what? That doesn't hide the fact that everything… and I do mean everything we do will be past along to the next generation and thus to the one after… and if along the line some idiot grand-grand-grand-grandson does something really, really stupid, our hands are clean from such a thing? And vise versa, if a descendent invents a cure for a disease, I think all his ancestors have some small yet important part in it.

In this day and age, you don't have an excuse not to do your homework on parenthood before getting mixed up in it. (And for you people reading, you're smart enough to join the net, go to amazon.com and buy books on raising children, and no… I don't get commission).

Anyway, I guess the message that I'd like to rub on you is… Think before you do… you know… before you do what people do… ummm… the birds and bees? And Think Real Hard before you have a second child, and Think Real Careful before the third child… if you're going on 4th, there are surgical solutions by the way!
Posted by Abdulaziz at 11:54 PM 4 comments: 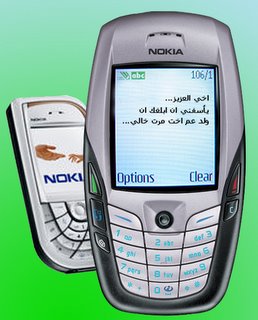 Life couldn’t be any better… That’s what was occupying my mind the night of Thursday last. Like smoke, slowly expanding across the horizon, thoughts of Relaxation, Comfort, Sleep, etc. were filling my mental atmosphere. I was driving home, from a strenuous day, happily devouring all those thoughts of just utter, absolute, peace of mind. Working in the private sector, I only have Friday to bask in relaxation for Saturday brings a whole new bag of work related problems and mind boggling issues.

Oh… A message on my mobile, who could it be I wondered? Could it be my sweet loving lady, wondering whether I’m on my way home, and if I was, she wishes me a safe drive home? Or could it be my wife? (I’m kidding… I’m kidding… I, in no way, shape, or form, support adultery, and I condemn anyone who cheats on his spouse). Anyway, I digress…

So, I opened up the message and the first thing I noticed was the number of the sender (if it was someone already saved on my Contacts list, a name would show instead, obviously) then the message…

“Dear brother (friend), my father’s cousin has passed away.
The burial is going to be held tomorrow afternoon”

At that moment, a gush of thoughts filled up my mind, and a rush of emotions, my heart (or soul, or wherever the hell you keep your emotions), here are some:

But what can I do? The guy practically advertised the burial/funeral. I can’t use the classic excuse “I’m so sorry, I only knew a few days ago and it was too late to come”. I can’t say I was out of the country, Kuwait is too small a place for a lie like that to fly. Damn it! Can I say I was bed stricken sick? Would I need a doctor’s note for that? Well how would that actually go? I’d fax a condolence letter and give the excuse of being sick, and then attach the doctor’s note for proof? Noooooo… That won’t work either. DAMN IT!

Besides, why on earth would anyone advertise a thing like that, that way? I mean, first of all, if someone is so devastated for a loss of a close one, they shouldn’t have the time to write bulk SMS messages in the first place.

Aren’t situations like these supposed to show you who’re your friends and who aren’t? Well if half of the people in the country are going to come because your stupid message left them no choice, how can you really know for sure that they care?

And what does that tell you about those people’s self-esteem? (the ones that send these kind of SMS) Is it that low that they seek a boost by knowing a lot of people came to pay their respect?

Well… Stick to the traditional way of announcing someone’s funeral (the back of the daily newspapers) and then you’d really know the head count of the people who come, the people who care.

Ok… maybe by increasing the number of people who attend the funeral, this would increase the “Good Karma” for the deceased. But what about ruining the people’s weekends? Isn’t that “Bad Karma”?

Anyway… that’s it… I talked a lot… and the room I’m in is starting to get real humid from all the steam I blew off.

O’ by the way… a few days ago Jerry Seinfeld went on The Tonight Show with Jay Leno and on his stand up act, he basically said the same thing I’m saying here, but on the subject of weddings and how they ruin the guests’ weekends for the sake of the pride and groom, and how he prefers not to get invitations.

Now, because he’s Jerry Seinfeld and he was mocking weddings, a generally joyous event, that would be called comedy, and because I mocked funerals, I’m a bad horrible person? I think not! I’m only exposing my dark side for the sake of comedy… This is all for the ratings…

All for the ratings… 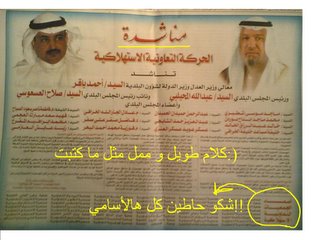 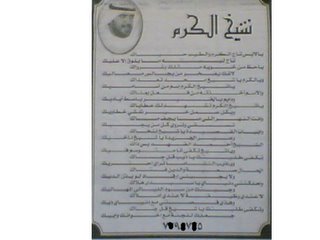 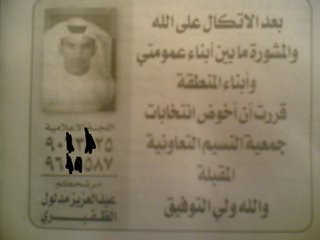 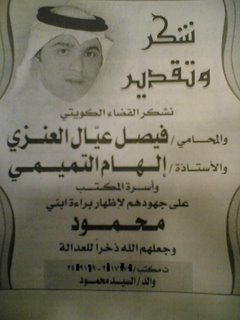 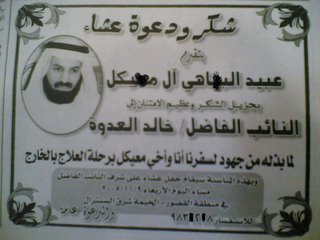 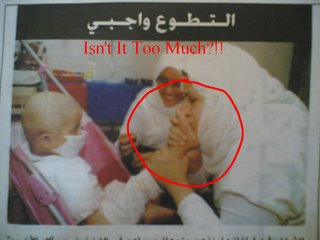 I am one of the biggest fans of LOYAC's programs and activities; they are doing an excellent job in keeping the youths busy in doing useful stuff during the summer. However, don’t you think that this ad is too much!
Dudesss, I think you can deliver the point that you like to help needy children with a less extreme picture, what about showing us a picture of you feeding the kid? Or show us a picture of you giving him some toys? Whatever!
Kissing the kids feet is not the best view, I don’t know about you guys, but for me this picture is a bit gross! I think it is too much!
Posted by Mohammad Al-Yousifi at 5:10 PM 16 comments: 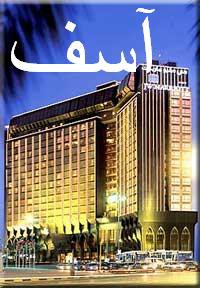 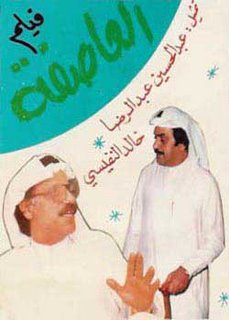