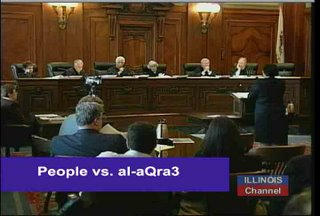 Prosecution: Your honor, jurors, people of this blog. During this case, we will prove that the defendant al-aQra3 is guilty of malice, thought provocation, and many other indecent, unheard of, actions. We will not only establish this on several accounts, but we'll also prove that given the chance, al-aQra3 will strike again. 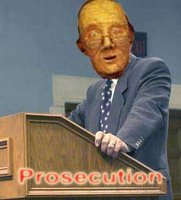 Judge: Will the Defense rise. How do you plead? 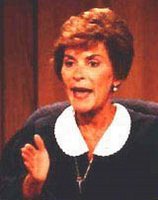 Defense: During this session, we'll prove that the defendant al-aQra3 was not sane during his actions. We will then suggest medical measures that are more suitable to his illness. We believe jail would not serve any justice.

Prosecution: During these many months, we established that not only is the defendant sane, but that his brain is functioning at a higher level than your average male (woohoooo.. alright… go me!). Which proves that not only was he intending to stir up a commotion in this peaceful town, but that his sadistic intentions were coming from lack of respect to the norm. The mere fact that the defendant is wearing bunny slippers to court, your Honor, proves that Mr.al-aQra3 is lacking the proper respect to this court -- --

Defense: Objection your Honor! My defendant has cold feet and needs the support and comfort of his bunny slippers -- --

Prosecution: Your Honor, I have nothing else to add.

Judge: You will speak in a language that is understood here. ENGLISH!

Judge: SILENCE IN THIS COURT!!!

Judge: I do not know… under what convoluted circumstances you, and your inhumane self, were given a proper education, an education which lead to the abuse of this blog site. You have been given a chance to live in society peacefully without challenging the status quo. But you had to abuse that privilege!

Judge: I cannot think of a better punishment than to ban you from writing on this blog site. 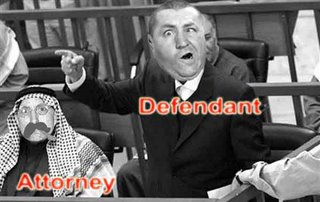 Bailiff: Court session is over. Case is closed!

Kila Ma6goog: I don't know, I thought we had it. I guess I was wrong… Oh well… al-aQra3 is screwed… Big deal!

Stock Expert: I think this will have a tremendous reflection on the Kuwait stock market.

Criminal Specialist: Damn it! Yes! YES! It's not a wig! Now can we move on?

Blog Writer / Butcher: Well what can I say? I think it is obvious that al-aQra3 is guilty. (To interviewer) I think you're cute… Want to see my knives collection?

"Crazy / Not Crazy" Author: The only way you'll know if someone is crazy, is if you flip a coin… See if it was Heads, he's crazy… If it was tails, he's not. Simple!

Witness: Why don't they just chop off his hands? This way they'll insure he won't write again. What? What do I do? I'm a kindergarten teacher. 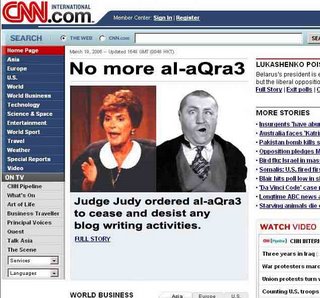 It has been one heck of a ride hasn't it?
We've talked about subjects ranging from watermelons to reproduction… we traveled together from Mecca to Bangkok… Well… what can I say… It was fun! Yes indeed… yes indeedeeeee!

Less is more… so I'll shut up now.

Posted by Abdulaziz at 9:15 PM

Judge Judy is a hardcore feminist lesbian. She's just jealous because she has a crush on Natalie Portman after shaving her head for that new film, and since your an agra3 like her she wants to ... oh, wait, that doesn't work .. she's a bloody dyke. Well, anyways, she's a lesbian, I know that trust me.

You should reconsider, aQra3 .. or I'll send you my ninja midgets with my three cats (the fourth just gave birth to five more .. careful). Midgets will attack your gar3a and cats will use your watermelon tray .. to, erm, you know.

if u r really do not want to be here any more...

we will miss u alot Mr. Al-aQra3

al agra3
i urge u to reconsider quitting.. i mean u dont post that often already, so u can still do that from time to time
leave the option open is all am saying

Fishing for compliments, are we not? :-p
Kidding..

You look scary, that's why. No honestly, unh, your topics are good (of course you do not need me to tell you this) but most of what you talk about is, erm, higher than my comprehension level. Honestly. I mean, I know not a single thing about stockmarket & politics. You don't want my smart arse comments on your posts, believe me :-p

I did leave a few comments. Your bluetooth post, and I forgot what else. See, Temetwir's already in love with you and your posts, so chin up :-p

I hope what I just said makes sense. If you pretend that it does, I swear I'll love you.
Kidding again..

I do love them though!! I would still read your blog if al agra3 stopped writing. Though he shouldn't li'ana he's half. If you don't have half you're just stuck with half. What's the point of having half if you can have a whole? 3araft?

Al Agra3: Excuse me? I don't think so. You're not getting out of here that easy! You're the blogosphere's genuine funny bone, bunny slippers and all. Yes, blogging can take up some of your time, and yes, you get a few discouraging comments (and a good share of snarky emails) shot your way, but it's all good in the end. I truly enjoy your writing because it's sincere and wonderfully weird. You write about issues that we tend to overlook...watermelons anyone?
Kila Ma6goog aka my chance to read Arabic (apart from El Qabas and other online Arabic newspapers I force myself to look over...hehe :P) Both you and Al Agra3 make this blog what it is: A heartwarming page that's filled with amazingly absurd observations and personal opinions. It feels like home here, and I treasure that.
Gentlemen, I revere your frankness and authenticity and wish you the best of luck. Al-Agra3, reconsider :) Or maybe, suprise us with random input.
Take care...

*wipes her eyes with her sleeve*

I agree with what Eruzille said.
Come on, we voted for you in the Annual Awards thingy...

I am truly moved by your comments.

Though Kila Ma6goog's outbreak and need for attention pished (Sean Connery accent) me off! :P Damn it, عن الدلع.

ummm... I love it here, it's my safe haven. Its my comfort zone.

But... I am sensing a development of an addiction from my end. The constant need for validation.

Since I started writing here, I lost my job, got divorced, lost custody of my kid... I really need to put my life back on track. I haven't seen the light of day since ummm November last.

Ok point taken, I’m not going to quit. I'll just take some time off... Give the floor to Kila Ma6goog and The Doc.

My email is still there...

apart from that stupid ode to Kila Ma6goog, the rest of the stuff i wrote came from the heart.

Good to know you're staying :-)
Will be waiting for your next post - and ma6goog's, of course ;-p

I've never read anything by the Doc .. I'm sure your opinion of him will be of great help to me, as well as to other fellow bloggers, though.. thanks

its really sad to see all these kuwaities who feel ewww o ayyy o noooo for reading the arabic posts?

arabic is ur mother lang, u should start from here and now to read arabic

when i started to read this blog i used to see both of you al-aQra3 and kila ma6goog writing ,, and you both el sara7a doin a great job.. so al-aQra3 i'm happy ena you are thinking of gettin yr life back thats a positive thing to do ,, bs el negative thing stop writing :(
bs etha this thing will take yr life back on track do it :) and Good LUCK
we're gonna miss ya :)
Take Care