where is ur ipod? 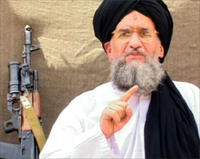 The search for OBL and his gang was kicked off 4 years ago, searching in Afghanistan, Pakistan and all the "Stans" in between!
Given the fact that Mr. OBL is not living alone and not moving alone also! Even better than that, the guy is up dated with a newer Kalashnikov's (compare them in the pictures above or bellow)
Also OBL is been sponsored by Panasonic or Sony whose providing him with all the electronic and technology devises he needs to make his academy award films!
To make it short, the guy looks healthier; he doesn't look like a starving run away!
Also he is updated with all the news and actually having a say on it!

I have no idea about what you are thinking, but I am not buying the idea that these people are living in some deserted mountains in the middle of Tora Bora
These people are moving in groups, they are reaching Al Jazeera whenever they want so how come the US didn’t find them! Where is the CIA?? FBI?? SEC? IRS??
Are they sleeping or waiting for me to find him by Google Earth?


I hate to say this but as of today, I am one of the strongest believers in the conspiracy theory, I think OBL and his gang are in Al Paso or Nevada enjoying their steaks and playing rodeo